Replacing fee income in your NII, Gen Z sees brighter days ahead, and Fintech's use of rising interest rates to drive growth

And so December is upon us and, with it, the last push or winding down of the year. This week we have a case study on the consideration for cutting fees as a competitive differentiator, the surprising financial optimism of Gen Z, and how Fintechs are leveraging the rapid rise in interest rates to subsidize their customer acquisition costs.

1. Getting ahead of the coming NSF cliff

Jennifer Robison writes on the planning $2B Amplify Credit Union took in eliminating both checking and overdraft fees. Kendall Garrison, Amplify’s CEO pointed to competitive factors and the likely actions by regulators (particularly the CFPB. Amplify took this market shift as an opportunity to go all in on fees while at the same time adjusting their business model to maintain revenues:

Garrison says that the $2 million loss Amplify expects will be offset in two ways, interchange income and improved net interest margin. Amplify arrived at that conclusion through intense mathematical modelling, which examined members’ checking and saving account behavior in detail over the course of nine months. That modeling revealed consumer behaviors with significant financial potential.

Consider interchange fees. “Interestingly enough, relatively low-balance checking accounts have a much higher rate of debit card interchange income because those members tend to swipe their cards on a very frequent basis,” said Garrison. That income adds up quickly. In 2022, Amplify Credit Union’s monthly gross interchange was at an average of $13.63 per active card.

While many agree NSF and similar fees are no long for this market, exactly how and when to address it is an open question. It’s notable the extent of listening Amplify did with their customers both in surveys and reliance on their customer data. This asset enabled them to make a critical decision like this with confidence and speed to yield a competitive advantage.

2. The surprising optimism of Gen Z

Morning Consult presents survey results showing how 4 out 5 Gen Zers believe they will be at least as financially successful as their parents. While most would expect a more dire outlook from this rising generation, a resilient streak seems to come out: 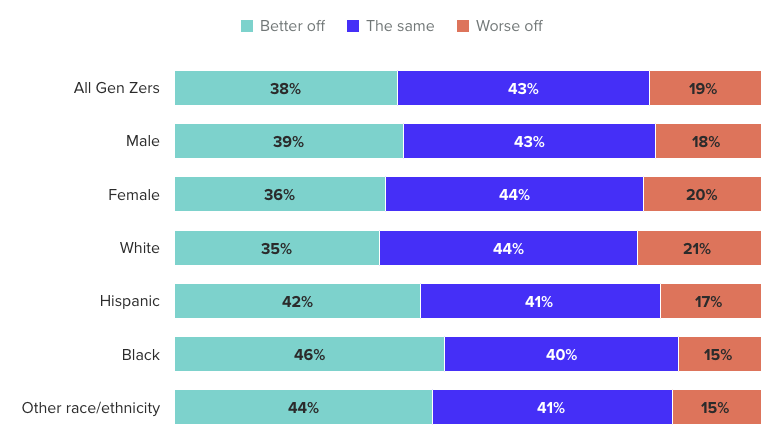 This may be early indications of another historical turning in the Strauss-Howe Generational Theory and the dawn of another class of artists born out of crisis.

Marc Andrusko, fintech partner at VC firm a16z, writes on the use of deposit beta, or aggressive pass-through of rising interest rates to depositors, that some fintech companies are using to accelerate growth at the cost of traditional banking institutions.

In many ways, these costs are just paid customer acquisition costs (CAC) in disguise. While these banks may not be spending incremental dollars on digital ads or a piece of direct mail, they’re eating into their own net interest margin* in the form of paying out more interest to their customers. Why might they be doing this, especially as the behemoth traditional banks are conspicuously not doing the same? Because neobanks, unlike the largest banks in the country, don’t have a massive embedded base of customers that are unlikely to churn. Due to the high degree of inertia that exists in the banking market, neobanks need to fight to acquire and keep their customers, and deposit accounts are an excellent wedge into potentially cross-selling a more holistic suite of revenue-generating banking products, such as loans, financial advice, or insurance.

As you plan on how to adjust rates, especially considering the Fed’s signaling of slowing rate growth, the competitive ins/outs and quality of deposits should be carefully tracked and measured as strategic KPIs.

That’s it this first Friday in December. It’s officially that time of year again. Stay off my lawn, Mr. Ridgeley! We hope something piqued your curiosity. If so, let us know. If not, let us know. blog@mindspaninc.com.