White Goodman has the insights

A few headlines to round out your week for the busy community banking professional. Today how will changes in credit reporting of medical debt hurt or help consumers, some data on economist’s crystal ball on recession likelihood, and Apple’s bigger leap forward in embedded finance.

Anish Acharya of VC firm Andreesen Horowitz writes on the unintended consequences of the CFPB’s proposal for the credit agency treatment of medical debt.

The three major credit bureaus announced earlier this year that they will be dropping most medical debt from credit reports. Both paid and unpaid collections under $500 will be dropped in the coming year, and the reporting requirements around such debt will be made more favorable to consumers

Unfortunately the campaign driven by the CFPB (Consumer Financial Protection Bureau) to change medical debt reporting will do the very opposite of what was intended. It’s likely to decrease accuracy and increase the cost of credit for non-prime U.S. consumers (generally the middle class, the young, and the working poor).

For the macro-economic data nerds, here are a few links on predictions of a recession on the horizon.

From the American Banker estimates of the likelihood of a recession in the next two years:

The American Bankers Association’s Economic Advisory Committee, composed of 13 chief economists from some of North America’s largest banks, expects the Federal Reserve’s current rate hike agenda to help gradually curb inflation from above 8% now to near the Fed’s objective of 2% over this year and next.

Still, according to the ABA committee, there is a 40% chance of recession next year. Rate hikes that come too fast or prove too high, stubbornly elevated inflation, little resolution to supply chain problems, or a sharp housing correction could tip the economy into a downturn

Often cited in related writings is the predictive nature of an inverted yield curve as a predictor of broad economic recession. The Fed tends to downplay the relationship (although not completely dismissing it as spurious correlation). Dario Perkins of TS Lombard points to past comments from the FOMC on their doubts around this indicator’s usefulness, not all having aged well.

Link to Fed data below: 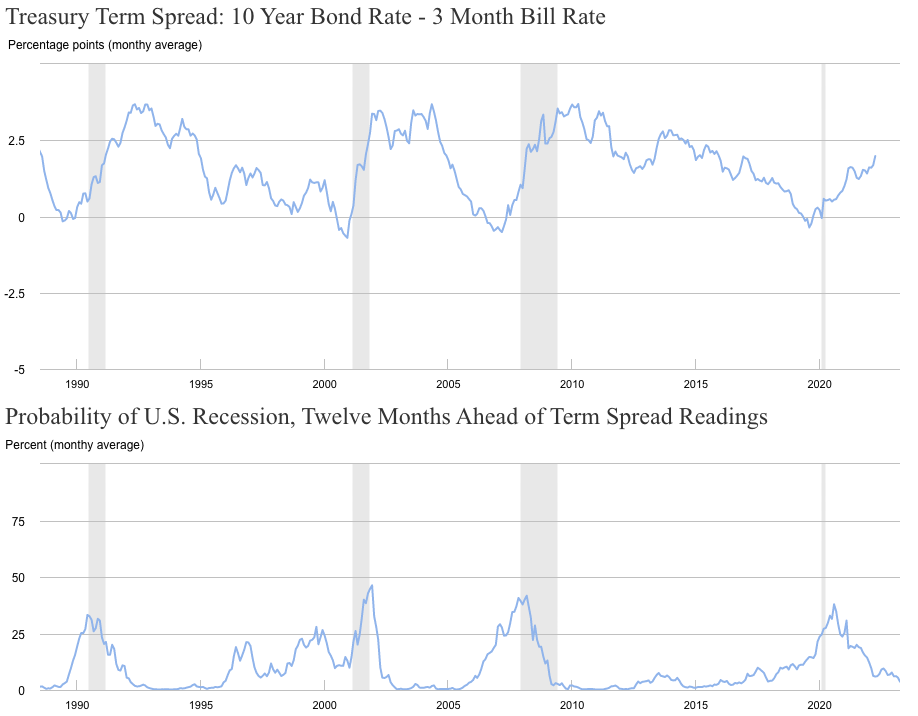 Big Tech’s move into the core banking business has been long feared on Wall Street after years of an uneasy alliance in areas such as mobile payments. In the past, Apple has worked with Goldman to issue a credit card in the US, as well as with banks such as Barclays in the UK to offer financing for purchases of its own devices.

However, those banks’ roles are diminished in its latest financial product.

Goldman is facilitating Apple Pay Later by allowing Apple to access MasterCard’s network, since the iPhone maker lacks a license to issue payment credentials directly. But Apple is handling the underwriting and lending using its new subsidiary.

Apple previously faced issues and backlash from apparent gender bias in qualification for Apple Card. The use of automated credit determination has come under more scrutiny with the Consumer Financial Protection Bureau (CFPB) clarifying requirements for adverse action notices regardless of underwriting method.

So end’s another week. Remember, credit card fraud can lead to having a payphone in your home. Let us know what you think of these at blog@mindspaninc.com, and share as you like below.